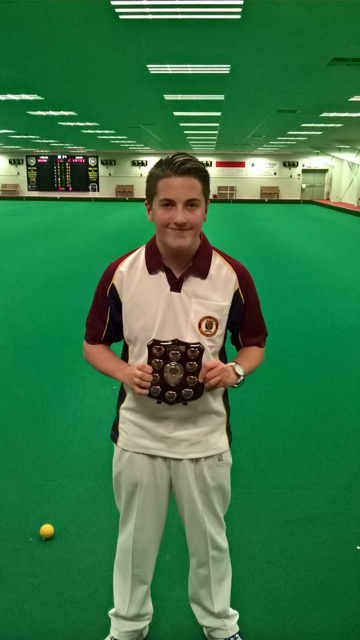 On Sunday 23rd October the National Finals were held at Melton Mowbray IBC. As usual the format was a morning of Round Robin Singles followed by an afternoon of various skills exercises split into Junior and Senior sections. The County had one representative in the Senior section, Ajay Morphett (Egerton Park IBC) who had qualified by winning the Regional Final at Horsham IBC.

The morning singles was disappointing for Ajay who, having had a good win in his opening game, had hard tussles in his other two matches which both went against him, giving him 10pts from the morning session.

He however, came out fighting in the skills sessions in the afternoon and with a good solid performance in all the skills disciplines was overall winner with 79pts, 12pts clear of the second best.

This score, added to his morning total, qualified him for a semi-final place to find the Overall Champion. He was unlucky to come up against the eventual Overall Champion who bowled ‘out of his skin’ throughout the semi-final and was a worthy winner.

So congratulations to Ajay on a successful day and more proof that he is definitely the best Under 18 the County has produced for a long time.

The Senior County finals of the EBYDS School of Excellence took place on Sunday 6th March at Horsham IBC despite a disappointing attendance partly due probably to the fact that it was Mothers Day. Of the 12 that entered only 10 turned up making gaps in the groups concerned and with no time to redraw the whole competition they had to play in two groups of 3 and one group of 4 in the round robin singles. This was not ideal as byes had to be awarded in the matches where the missing participants would have played, therefore 10 points were gained for each of those games without having to play, which was somewhat unfair on those in the group of 4 but unavoidable. Simple apology phone calls prior to the day by those who didn’t show would have enabled a redraw and a fairer competition. Having said that, the standard was as high as ever and the Presidents and Senior Vice Presidents of both indoor and outdoor associations were present to show the level of importance given by the County to these events and to present the trophies and Certificates of Attendance.

After the morning round robin singles, the winners were Michael Murphy (Grattons IBC) for the boys and Alice Phillimore (Egerton Park IBC) for the girls.

In the afternoon they all took part in the various skills exercises which resulted in the winner of the skills being James Brennan (Worthing Pavilion BC) for the boys and Hannah Maslen (Grattons IBC) for the girls.

At the end of a hard fought day after the scores for the singles and skills were combined the Overall Champion was James Brennan and the Runner Up was Ajay Morphett (Egerton Park IBC).

These two will represent the County in the Regional Finals at Horsham on April 17th along with the winner and runner up of the Junior Finals held earlier in the year and we wish them all the best of luck.

On Saturday 9th January, Horsham IBC was once again the venue for the EBYDS County Junior Finals. There were 15 entries (disappointingly down on last year) but one cried off sick overnight, however we were lucky to find a youngster at Horsham to step in to make up the original number.

The Singles round robin produced the normal mix of experienced youngsters and a number of juniors who were playing in this type of competition for the first time. All acquitted themselves well with the girls being far better than the boys, resulting in them taking the first four places at the end of the Singles.

After lunch it was time for the Skills, again the girls took three of the first four places to underline their superiority. Once again the standard of bowling impressed the watching dignitaries who were so intrigued by the different skills that they even ventured on to the rink at the end to try one of the skills for themselves.

When the dust had settled and the scores were all totalled up the winners were as follows:- 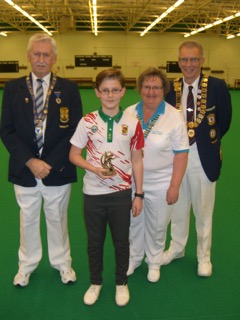 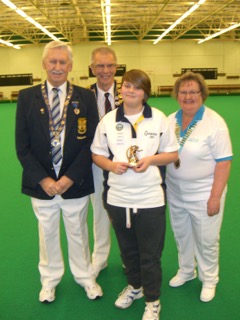 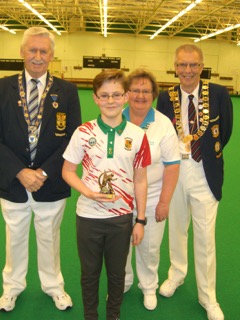 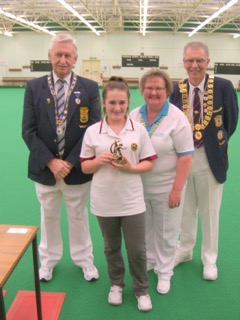 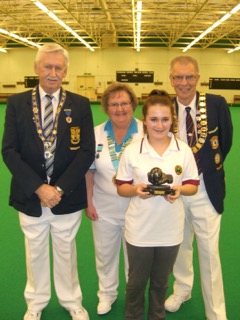 The presentations saw Malcolm Goman (SCIBA President) and Gill Henty (SCWIBA President) present the Attendance Certificates to all the participants and Terry Mitchell (SCB President) give out the winners awards, these roles will be reversed for the Senior Finals on 6th March.

So congratulations to Maesi and Holly who qualify for the Regional Finals at Horsham on Sunday 17th April at which we wish them good luck.

Thanks go to the umpires and all the coaches who attended for marking duties and to all the parents for ensuring that the youngsters all turned up in plenty of time.